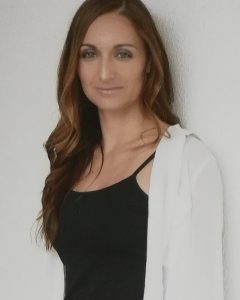 Graduated in Modern Languages and Literature in English and German Studies - Educational Trainee at the University of Coimbra (Universidade de Coimbra) since 2002. She attended under the Erasmus Programme, Karl-Franzens-Universität Graz in Austria from 1999 to 2002, where she also started her professional training teaching English and Portuguese as a Foreign Language in the city of Graz (Austria). Between 2013 and 2015 she took the CET - Level IV, Defence against Forest Fires at the Agricultural College (Escola Superior Agrária) of Coimbra. She holds a certificate of professional aptitude which gives her skills as a Professional Trainer.

Teacher of Foreign Languages and Portuguese for Foreigners to students from pre-school to adult education. She has worked for some national and international companies as an International Account Manager, Project Management Support, Sales and Customer Services Representative for foreign countries and translator. She is a DFCI Forest Technician at Afocelca and National Authority of Civil Protection (Autoridade Nacional de Proteção Civil) and Crew of Transportation Ambulances since 1996. Addicted to adrenaline, she loves travelling, extreme sports, aerial yoga, animals, nature and does not miss the sunset on the beach.